Bosses the world over are struggling with their millennial employees – they say they confound leadership, are self-entitled, narcissistic, lazy and tough to manage ORDER15’S own supporters  have experienced first hand millennial co workers arriving 2 minutes past 9 o clock. and when confronted about being late then arguing it was only 2 minutes. But its not only 2 minutes because of course by the time they have taken their jacket off got their things from their bag turned on their computer and made a cup of tea its actually 0915 before their ready to actually work. Generally such people have to be constantly monitored to make sure their not using social media and when caught and confronted then tend just to be irritated they where caught.

According to motivational speaker and author Simon Sinek, this is the result of our parents’ “failed parenting strategies.”

After the astounding success of his video on millennials in the workplace, which has had over 56 million views on Facebook alone, Sinek spoke out  about how our parenting, combined with social media, working environments and our impatience have created a generation plagued by low self-esteem, and what we can do about it.

According to Sinek, 43%, parents of millennial have now realised that their well-intentioned parenting strategies may have backfired.

They told us we were special all the time and could have anything we want in life. We got medals for coming in last and if we didn’t get into the best clubs, our parents complained. This meant entering the real world was a shock and our self-images were shattered.

“It was a time when greed was good and parents raised their kids encouraging them to be individual and put themselves first,” Sinek explains.

“Whilst really great in theory, parents were also pushing their kids to get the top grades, focus on rankings and make money, which left them conflicted.”

​Sinek knows of millennials who’ve gone to their bosses asking for a promotion, but openly saying they only want the title, not a pay-rise. The reason is that many millennials feel the need to show on Facebook and LinkedIn that they’re rising through the ranks quicker than anyone else – seeing a peer get a promotion inevitably creates stress that your career isn’t progressing fast enough.

And another problem is that we’ve been brought up to focus on having a healthy work/life balance – “the message is correct, but it seems to have been exaggerated and misinterpreted,” Sinek explains.

He believes the pendulum has swung too far the other way – while older generations may have felt chained to their desks, many millennials leave work on the dot of 5pm every day and refuse to answer work calls or emails over the weekend. This attitude is one of the reasons we have a reputation for entitlement.

Studies may show that the millennial generation reports having high self-esteem, but that largely includes narcissism and extrinsic rewards: “Reporting that you’re self-confident and being self-confident are not the same thing,” Sinek points out.

He believes it’s through no fault of our own that our self-esteem levels are so low, but we care too much about extrinsic affirmation. “Millennials say they want feedback at work but what they really want is praise and to be told they’re doing well. When you give them negative feedback, they cry or quit.”

However this isn’t just down to our parents – Sinek believes growing up in a social media age is much to blame for our constant need for praise and inability to deal with negative feedback. How many likes and followers you have is the new social currency, and all we care about is keeping up appearances online.

Sinek’s favourite example is on Father’s Day when millennials post pictures on Instagram of them as children with their dads, but their dads don’t even use the social network. “Just call your dad! It’s the weirdest thing to me,” he says. 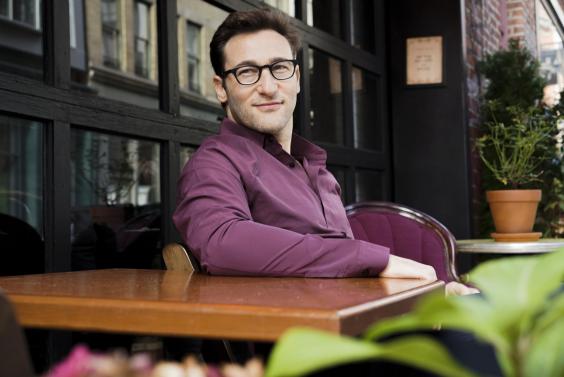 But with every notification we get, a hit of dopamine is released which is the same reason we feel good when we smoke, drink or gamble – it’s highly addictive. Sinek doesn’t believe technology is necessarily bad, but we need to be careful of using it too much.

Social media has, however, created an incredibly impatient generation who want everything immediately. What’s more, millennials don’t stick at anything for long enough, according to Sinek, whether a job or a relationship. the same of which can be said for the new generation of nationalists political allegiance or rather lack of it.

“If you have a new boyfriend every six months, would you really have the joy of love in a relationship?” he asks me. Having never managed to stick with any one guy for even that long – completely proving his point – I can’t really answer.

“For six months you’ll have it. You won’t experience deep love if you change boyfriends every six months. The same goes for jobs,” he says.

Isn’t life too short to waste doing a job you don’t love though? “Yes but there’s so much more time than you think – 24-year-olds think they can’t waste another month of their lives if they’re not changing the world, but it takes time.”

And it’s this obsession with making an impact that concerns Sinek, largely because many millennials don’t know how they want to do that:

This is a grave concern for nationalists because of course our next gen are the millennials too. We thought things where bad now in our various parties and orgs. The old guard would do well to hold on to power within our movement just a while longer than otherwise thought necessary. because that time for weeping for the future finally appears to have arrived.