Russian leader warns relations between Moscow and Washington are at their worst since the end of the Cold War. Although ORDER15 is firmly against electoral politics and democracy in general we never the less couldnt resist promoting Trump in a favorable light in the the run up to the US elections if for no other reason than to wind the left up even further. and the days and weeks after the election i think all of us on the Right were warmed by many of his actions. So its with some regret we report the latest news in regards the crisis in Syria.

Russia has information about a planned US air strike on Damascus involving chemical weapons that would be blamed on Syria’s Bashar al-Assad in an attempt to frame him, Vladimir Putin has claimed.

Without offering any proof to support the assertion, the Russian President made reference to strikes on suburbs in the south of the Syrian capital which he suggested would be the target of the supposed US raids.

He also attempted to link the US strike on a Syrian airbase last week with claims about weapons of mass destruction that were used to justify the 2003 invasion of Iraq, saying: “We have seen it all already.”

The provocative comments come as the Russian leader warned of the warned of Moscow and Washington worst relations between  since the end of the Cold War.

Mr Putin said Moscow would tolerate criticism from the West of its alliance with Mr Assad, but that it remained hopeful that attitudes would eventually soften. 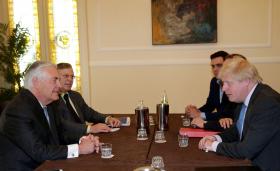 Speaking to reporters on Tuesday – hours before US Secretary of State Rex Tillerson is due to arrive in Moscow – Mr Putin said he would appeal to the Organisation for the Prohibition of Chemical Weapons to investigate the recent alleged chemical attack in Syria.

“We have information from different sources that these provocations – I cannot call them otherwise – are being prepared in other regions of Syria, including in the southern suburbs of Damascus where there are plans to throw some substance and accuse the official Syrian authorities,” Mr Putin said, after holding talks with his Italian counterpart Sergio Mattarella.

He added that some countries had voiced their support for the US air strike on Syria in order to build closer relations with the new Trump administration.

Drawing a comparison with the controversy surrounding claims, later proven to be incorrect, of WMDs being stockpiled by the former Iraqi dictator Saddam Hussein, Mr Putin said: “It reminds me of the events in 2003 when US envoys to the [UN] Security Council were demonstrating what they said were chemical weapons found in Iraq.”

On the investigation into the chemical attack, Mr Putin said: “We plan to turn to the United Nations bodies in The Hague and call on the global community to thoroughly investigate into this incident and make balanced decisions based on the investigation’s outcome.”

Russian Foreign Minister Sergey Lavrov is to meet Mr Tillerson on Wednesday. Earlier reports suggested Mr Putin would also meet the US diplomat, something Moscow has not commented on.

Despite heightened tensions between the US and Russia, the foreign ministry has said it continued to hope for “productive talks” with Mr Tillerson.

In a three-page statement issued ahead of his arrival this evening, officials said the outcome of the talks was important not just for Russia-US ties but “for the overall atmosphere on the world stage”.

Russia has been a long-time supporter of Mr Assad’s government, which was accused of launching a chemical weapons attack on Idlib province.

That incident prompted Donald Trump to launch a cruise missile strike from two warships based in the Mediterranean targeted at an air base said to have been the base from which the original chemical attack was launched.

Meanwhile, Russia’s General Staff has said the Syrian government is willing to let international experts examine its military base for signs of chemical weapons.

So it appears the neocon grip on the White house is as tight as ever.  Perhaps those of you on the right reading this might well give up, us as we have on electoral politics and join us at creating a viable alternative reality.